“Our local public transportation system is a critical network for local communities, driving economic growth and helping people get to where they need to be,” Hoffman said. “It’s important that this system is supported with the investments it needs to operate effectively. The Rebuild Illinois program is more than just roads and bridges – it’s a comprehensive modernization of our transportation infrastructure that is working to make travel safer and more efficient for everyone.”

“Over $3 million for Madison County Transit is a really big deal,” Stuart said. “Infrastructure and transport investments like these are force multipliers when it comes to economic development and growth. This news gives us more reason than ever to be optimistic when it comes to the future of downstate Illinois and the Metro East.”

Included in Tuesday’s announcement was $10.87 million directed to the St. Clair County Transit District for the electrification of transit vehicles with supporting charging stations. Additionally, Madison County Transit is expected to receive $3.75 million in support of transit communications and infrastructure upgrades. 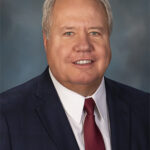