Kifowit Appointed to Governor’s Challenge Delegation in Nationwide Initiative to Prevent Suicide Among Service Members, Veterans and their Families

AURORA, Ill. – In continuing her effort to prevent Veteran suicide as Chair of the IL House Veterans Affairs Committee, state Rep. Stephanie Kifowit, D-Oswego, who is also a USMC Veteran, has been appointed to the IL delegation invited to participate in the Governor’s Challenge to Prevent Suicide among Service Members, Veterans and their Families in conjunction with the U.S. Department of Veterans Affairs and the Department of Health and Human Services’ Substance Abuse and Mental Health Services Administration.

“As the co-chair of the IL Taskforce for the Prevention of Veteran Suicide and chief sponsor of the subsequent legislation from that taskforce, it is an honor to be appointed to this delegation to continue the important work of meeting the needs of my fellow Veterans,” said Kifowit. “Preventing Veteran suicide and working towards a system of support for not only our Veterans but also for active service members and their families should be a priority for the entire state.”

Kifowit has been named to the Illinois delegation, and brings not only a Veteran perspective to the distinguished group, but also invaluable experience working for Veterans as Chair of the IL House Veterans Affairs committee, leader in the IL State Veterans Suicide Prevention taskforce and her extensive involvement on the local level with Veterans from many Veteran organizations.

“I am proud that Illinois has accepted the invitation to be a participant in The Governor’s Challenge as we continue to fight for our Veterans and their families, so that they can receive the support they need and prevent Veteran suicide,” said Kifowit. “We must continue to do everything we can to honor the service of those who have served, are currently serving and  their families by being there for them in appreciation for the service me and my fellow Veterans have provided for our country.”

For more information about the Governor’s Challenge or efforts to prevent suicide among Veterans, please contact Kifowit by emailing stephanie.kifowit@att.net. 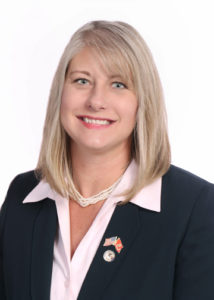