CHICAGO – State Rep. Jonathan Carroll, D-Northbrook, visited with Aviv Ezra, Consul General of Israel, to showcase the new travel routes between O’Hare Airport directly to Tel Aviv, Israel and to discuss ways to support the state of Israel in the Middle East.

“Illinois and the United States must do everything possible to protect and support Israel,” Carroll said. “Israel is the only democracy in a part of the world where there is no other, and the constant attacks on Jewish people here and abroad must end.”

Carroll recently met with Aviv Ezra, the Consul General of Israel, to highlight new travel routes between Chicago and Tel Aviv, Israel. Carroll and Ezra also spoke to the significance of the United States expanding its support for Israel domestically and abroad. As attacks on Israel and hate crimes are increasing worldwide, Carroll sponsored House Resolution 163 to affirm support for Israel and passed House Bill 38to increase penalties on hate crimes in Illinois.

“I believe this new non-stop flight between Chicago and Israel will be a game-changer for the future of the Illinois-Israel bond and deepen the relationship in many arenas including business, academia, culture, innovation and more,” said Aviv Ezra, Israeli Consul General. 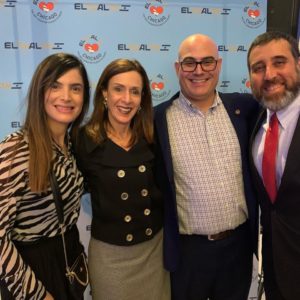