“Illinois needs to protect those who abide by and uphold the law responsibly,” Yednock said. “The rights of responsible gun owners are under attack in Illinois, and relentless Chicago politicians will stop at nothing to restrict Second Amendment Rights.”

Yednock and representatives from the ISRA helped residents better understand their rights as well as review standing legislation that will directly affect gun owners. Yednock has been a leading advocate for gun rights in Springfield, and he voted against legislation that would attempt to revoke gun owners’ FOID cards.

“I would like to thank Representative Yednock for his advocacy for Illinois gun owners,” said Richard Pearson, Executive Director for the Illinois State Rifle Association. “Illinois can and must do more to combat violence, but law-abiding gun owners should not be targeted as the culprit.” 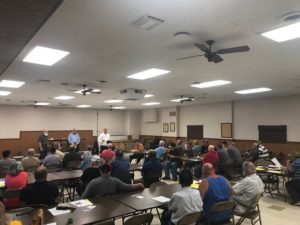