“Victims of heinous and violent crimes such as sexual assault and rape should not be afraid of calling the police to report the abuse inflicted upon them,” Harper said. “This law will help remove certain obstacles that might prevent someone from reporting a sexual assault or requesting medical help for themselves after an attack.”

Harper supported House Bill 92 to reform sexual assault reporting laws in Illinois by preventing police from executing certain low-level warrants on people who are reporting a sexual assault. Currently, police in Illinois are obligated to arrest victims who report rape and sexual assault if the victim has an outstanding warrant. This measure, which does not apply to those with warrants for violent crimes, instead requires police to issue a court appearance notification to victims reporting a sexual assault who have an outstanding low-level warrant. The Rape, Abuse & Incest National Network (RAINN) reports that only 23 percent of sexual assaults are reported to police, a far lower amount than for crimes such as battery or robbery. The purpose of House Bill 92 is to improve access to justice for sexual assault victims and help law enforcement direct resources towards combatting violent crime.

“HB92 is a crucial step forward for victims reporting sexual assault,” said Carrie Ward, Executive Director of the Illinois Coalition Against Sexual Assault. “Victims should not face the potential of being arrested as a result of reporting rape.  This victim-centered legislation will help propel Illinois forward in its efforts to prosecute rapists and secure justice for rape survivors.” 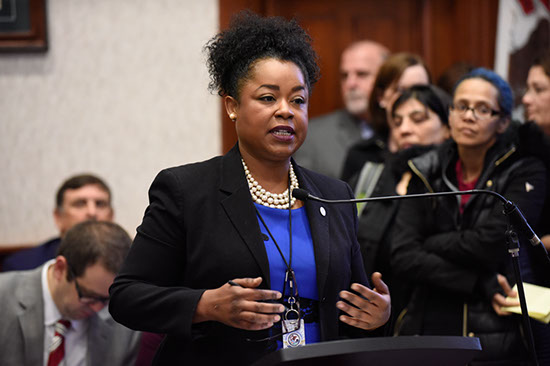