CHICAGO – State Rep. Camille Y. Lilly, D- Chicago, celebrated the enactment of a law to help ensure equal pay for women by banning an unfair practice that companies use to lock women into a lifetime of unfair pay.

“It is unacceptable that in 2019 women, particularly women of color, make just fractions of every dollar earned by a man for performing equal work,” Lilly said. “Bolstering our equal pay laws will put hard-earned and well-deserved dollars in the pockets of families across our state, building a stronger Illinois and building a stronger middle class.”

Lilly sponsored House Bill 834, which strengthens state law prohibiting employers from paying unequal wages to employees who have similar experience and perform similar duties. It would also make it illegal for employers to force job applicants to disclose their past wage or salary history when applying for a job, a practice that historically been used to continue pay discrimination against women. Barring corporations and employers from requiring salary histories helps break this cycle and prevents companies from locking women into a lifetime of unequal and unfair pay.

The measure received bipartisan support in the House and the Senate, and was recently signed into law by Gov. J.B. Pritzker. 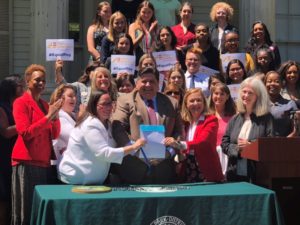