CHICAGO – State Rep. Delia Ramirez, D-Chicago, partnered with state Rep. Rob Martwick, D-Chicago and 35th Ward Alderman Carlos Ramirez-Rosa to host a Fair Tax Town Hall to inform residents about how they would benefit from a Fair Tax and to address any concerns.

“I hope local residents and small business owners found this forum useful and learned about how our community would benefit under the governor’s proposal,” Ramirez said. “Working families are struggling, so we need a tax system that ensures millionaires and billionaires pay their fair share in taxes.”

Under the governor’s proposal, roughly 97% of the local residents in Ramirez’s district, which includes parts of portions of the Humboldt Park, West Town, and Noble Square neighborhood, would pay the same or less in taxes. Under the plan, local families making less than $250,000 would see some tax relief, as well as a tax credit for each of their children.  Ramirez plans to continue hosting community events like this to hear from local residents on what they think should be done to address the issues facing our state.

“I want to thank those who attended and provided me feedback so I can better serve our community in Springfield,” Ramirez said. “I encourage all community members that weren’t able to attend to get in touch with me to learn about the need for a Fair Tax in our community.” 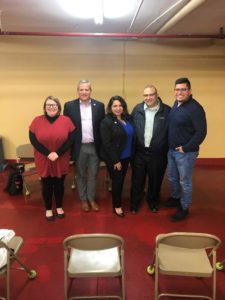