SPRINGFIELD, Ill. – Insurance companies will be required to cover lifesaving EpiPens for children under legislation passed by state Rep. Jonathan Carroll, D-Northbrook. Carroll presented the bill to the House last week alongside his young daughter, Brooke, who manages severe allergies.

“Many people, especially children, depend on EpiPens to prevent a serious allergy from costing them their lives,” Carroll said. “The fact that these injectors are not already covered in insurance plans is outrageous, and my legislation changes that by demanding insurance companies to cover the cost of EpiPens for young people.”

Carroll’s House Bill 3435 recently passed the Illinois House of Representatives with bipartisan support. His measure would require health care plans to cover the costs of EpiPens for people who are 18 years old or younger. Epinephrine is a chemical used in an injector to help people handle anaphylaxis, which is a severe medical emergency that results in a patient breaking out in hives, drop in blood pressure, chest tightness and more.

The cost of an EpiPen has skyrocketed over the last decade, rising by more than 400 percent for the two-pen injector pack. Without insurance, these EpiPens can cost a family nearly $700 and typically have a shelf life of a little more than a year before the medicine needs to be restocked in stores.

“The sole reason anyone buys insurance in the first place is to protect themselves from financial catastrophe, and it is clear to me that EpiPens should be included in coverage plans,” Carroll said. “Parents should not be on the hook to pay for these lifesaving EpiPens when their price is gouged. Insurance companies and their coverage plans should be helping families cover the high costs of medication, not padding their profits.” 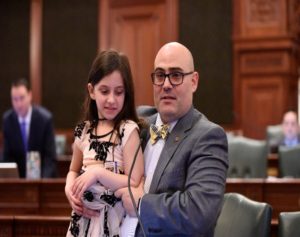 Rep. Jonathan Carroll and his daughter Brooke speak on the House floor about legislation to ensure children like Brooke who deal with severe allergies can receive lifesaving EpiPens.