“It’s critically important that we focus on growing and developing every neighborhood in Rockford by increasing homeownership,” West said. “Increased homeownership leads to more stable housing, which has better educational outcomes for children and helps to deter crime. By giving our local taxing bodies more control over money-saving programs for homeowners, we can drive positive economic growth for our community.”

“I’m pleased Representative West is working hard to pass this bill in Springfield,” Rockford Mayor Tom McNamara said. “Since taking office, I’ve made it a priority to be aggressive in the work we’re doing to strengthen our neighborhoods. Our City Council and our legislative delegation have been supportive in these efforts and our Legal Department has been diligent in its efforts to combat blight and vacant homes. Allowing municipalities to create programs that incentivize homeownership and investment in struggling neighborhoods will help increase property values for all residents.”

“Approximately 80 percent of the school district’s local revenue comes from residential real estate taxes, and Rockford’s residential market was hit hard by the downturn in 2008,” RPS 205 School Board Member Tim Rollins said. “When we partnered with other local taxing bodies like the City and Park District to look for ways to revitalize our residential tax base, we were all surprised to learn that the same tools we have available for industrial and commercial revitalization were not available for residential properties. I would like to thank Representative West for his efforts to give communities one of the same tools to revitalize their residential neighborhoods and provide incentives to homeowners that they currently have to incentivize business owners.” 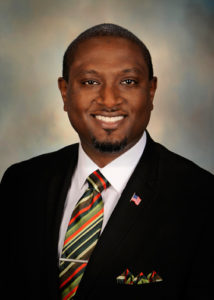